Be Sure To Subscribe To Richard Cummins (Sir Richard The Lionheart)

Sir Richard The LionHeart
Mission, BC, Canada
Musician, Philosopher, Follower of The Way, 'Prophet' as labeled by others, Outcast, Owner/Producer of Nectarine Horse Indie Recording Studio, One time Stuntman.

I’m going to criticize Ted Cruz in this open letter.
But NOT for what you think…

Please read, especially those of you who consider yourself a Christian. For anyone else – it is a curiosity, isn’t it? Join the party and think for yourself.

Oh, and please don’t just watch the video yet, I have something to hone in on, and to me, it is extremely important..thnx :)

There is no codified answer that is simple.

Perhaps more powerfully, true and faithful followers of the historical Jesus – which does not always equate to the ‘sanctified and accepted Churches either Protestant or Catholic, beliefs or associations’ – may find their identity more simply communicated in what they are *not*. It’s True.

Let’s use Ted Cruz for an example. This so perfectly illustrates my deepest of frustrations with all who cling to and claim to be ‘Bible Believing Christians’, who ‘Do It By The Book’. I know I’m going to pick on Ted Cruz here, but it equally translates across the broad spectrum and is a window into seeing the gross liberties and the massive and scary lack of understanding my so called contemporaries, or fellow ‘faithful in Jesus’ actually have, and the double standards lived day in and day out by these hypocrites, who only damage true religion. I AM going to blast Ted, but not for what you are thinking. I will post a video at the bottom *exposing* Ted, but I want you to read carefully what I’m going to post next.

It really is helpful background:
The bible is 2 sets of covenants, usually comprised of 66 books with over 40 different authors written over thousands of years – all with a general theme that has no contradiction. While the first covenant serves as a groundwork and under-girds the 2nd, ‘Christianity’ itself is based on the revelation of Jesus – as ‘fulfill-er’ of the requirements of the first covenant (which was deemed necessary due to man’s inability to co-exist relationally with God), thus becoming an extension, or sect of Judaism with the understanding of a ‘breaking of the boundary’ between Mankind and their Creator, so as to journey to the end of the story once again in relationship directly with God. (Very nutshell)

So the second covenant, or the ‘new testament’, is full of letters. Simple letters sent between the burgeoning groups of people who either witnessed Jesus personally, or heard of him and followed the call of God. How these ‘postcards’ turned into textbooks is for another time – but the ‘new testament’, the thinnest part of the whole bible by the way, includes something truly great - 4 versions of a testimony of Jesus. 3 written by 3 who walked with Jesus physically, and one overview by a notable doctor and historian of the time.
This is the heart of that strange word they call the ‘Gospel’. Gospel just means “Good News!”

So leaving all the postcards aside, what was known as the ‘Good News’ was the life of this Jesus, and the stuff he actually said.
I like this stuff.
A lot.

So does Ted Cruz, he says so himself! His Dad makes a fantastic living, as do Pastors in general (Joel Olsteen and Benny Hinn could end world hunger alone) by re reading all these 2000-year-old postcards to people who show up to hear them. Ted and his family humbly reduce their stature by getting on their knees to pray (listen or converse with God) for *hours on end*.
As a household with a built in Pastor (his father), every day was Church for the Cruz family, and the ideas found in the bible were greatly read, contemplated, respected, and followed.

Now onto my frustration.

The very acts that do violence to true religion.

Ted Cruz praying, and how he teaches his family to pray. 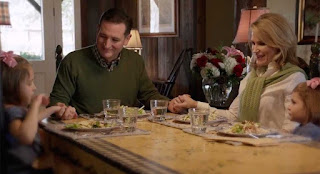 I like the stuff that the guys heard Jesus say. I like the things that Jesus said that blew their tiny baffled minds, that made them sit on the side of some dusty road outside Jerusalem and wonder exactly what they were doing or what they got themselves into.

Because Jesus was strange to them.

On one hand He hung out and drank wine with the whores, and sat around telling stories with the rejects of society.
All the while a deeply seated resentment and burning anger was smoldering right underneath for those who went out of their way to appear religious.

“BE CAREFUL NOT TO PRACTICE YOUR RIGHTEOUSNESS IN FRONT OF OTHERS TO BE SEEN BY THEM. If you do, you will have no reward… when you give to the needy, do not announce it with trumpets, as the hypocrites do in the churches and on the streets, to be honored by others, Truly I tell you, they have received their reward in full..” (the conceit of social standing & esteem of others, but nothing spiritual from God).

THEN - this is Jesus talking – then Jesus says,

“AND WHEN YOU PRAY, DO NOT BE LIKE THE HYPOCRITES, FOR THEY LOVE TO PRAY STANDING IN THE CHURCHES AND ON THE STREET CORNERS TO BE SEEN BY OTHERS, Truly I tell you, they have received their reward in full. But when you pray, go into your room, close the door and pray to your Father, who is unseen. Then your Father, who sees what is done in secret, will reward you. And when you pray, do not keep on babbling like those without true religion, for they think they will be heard because of their many words. DO NOT be like them…”
- Jesus

Feel free to re-read that bit as much as you want. You can even tell your friends!

You know, if you’re an actor in a theater/film and there is a scene where you pray, go ahead and read your lines. This is certainly not blasphemy.

But that certainly is NOT what is happening here.

Here we have Ted Cruz, a self-avowed Christian making this commercial, to portray himself and his family to the American people purposely in a *favorable way*.

This is not supposed to be acting – this is Ted Cruz and his family, your next ‘1st Family’, ‘just as they are’, in their ‘natural environment’.

And how does he do it? By Prayer!

So what are we to make of Ted Cruz and family at 2:28 in this ‘making of commercial’, or the commercial itself?
The problem is – as much as Ted Cruz preaches on homosexuality, abortion, his dominion theology, or a host of other subjects he 'interprets' from the bible – how did he miss this? This simple straight forward record of Jesus speaking about the very thing he is doing.

How – truly, how – does he think by literally going against the very words of the man Jesus – forget all the postcards (Bible), the messengers (The Apostles), and the Disciples even – this is THE man himself!

These are the words of Jesus!

Ted knows better than the very man’s words he has pledged his life to following and serving. 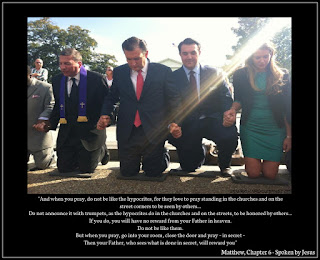 Ted says - that in fact - he WILL pray on the street corners to be seen of men – and for they very purpose of it to make him look favorable in the eyes of men! He will babble on, and then teach his innocent young girls to do the same, and corrupt them in an act of hypocrisy they could not begin to understand.

“Don’t you see how religious I am now?! Don’t you esteem me more?! Am I not now SEEN and PRAISED by all as a man of RIGHTEOUS ACTS and a MAN OF PRAYER?! Don’t you SEE?!”

Sadly, that is the core of the whole commercial.
All the while, his very own Lord and Savior that he has proclaimed is saying at the exact same time:

- Be careful not to practice your righteousness in front of others to be seen by them, as the hypocrites do in the churches and on the streets, to be honored by others.

- When you pray, do not be like the hypocrites, for they love to pray standing in the churches and on the street corners to be seen by others

- Go find a closet, lock the door and pray in secret (From the New Testament book of Matthew, Chapter 6. Read it for yourself)

Why is this important? Want to hazard a guess?

Because talk is cheap, and you can’t fool God, and if you give charity for the sake of recognition, which is sadly personal gain in the guise of religion – guess what? People will regard you, but God won’t! You’ve actually done the opposite.

This is how a genius weeds out the fakes.

They don’t want to hear of it. They want to see it said, yes, but by DEED, and deed alone.

Because that’s reality. Anything else is disingenuous.

Someone very keen once said, “If the Church did its job, there would be no need for welfare in this country!” You see, the very first “Social Program” wasn’t legislated, or argued about and voted on in a senate hearing.
The first social welfare program was simply the love of God, received by you, and then through you. The love you felt - compelled you, in fact - to love others. It just happens because you can’t help it. That is true religion.

And then there are those annoying trouble makers who break the chain, and rather than doing it – sit in front of a camera and showboat about it. This is NOT religion in any form, but a sad case of hypocrisy at it’s very Christ-denying worst.

Ted, Jesus said don’t do it.

This isn’t some debatable side doctrine written by Paul the apostle as he struggled to take over and control the young band of the faithful that called themselves ‘followers of The Way’… This is Jesus being as clear as he has ever been in recorded history.

What are you thinking, bro’?

In fact Ted, you have no right to call upon others to change their life in any way when you so blatantly sidestep what Jesus has clearly told you – in fact, you actively do what he exactly said what not to!

Ted Cruz, with this material, has denied all Jesus said in Mathew Chapter 6.

Please read Matthew Chapter 6, verse 5 to 8 while watching Ted’s commercial at 2:28. It’ll be a great time to go on a diet, because I promise you, you will lose your appetite.